Today we gave our first presentation to a Boys' Brigade Company.  The 8th Wigan Boys' Brigade is based in Hindley at the St. Peter's Pavilion which has a wonderful set of facilities for the groups which meet there. We thought that this presentation would prove to be quite a challenge due to the 8 to 18 age range of the boys there, but as you will see, it went very well.

The Company sat on the floor in front of the large screen at one end of the hall and we started the presentation with our usual introduction and video of a Barn Owl and a Kestrel hunting in the snow, to show how marvellous birds are and why we enjoy watching them.

Then Tony, Brian, George and Martyn each took it in turn to describe the main features of two common birds and how to identify them.  The song of each bird was also played to explain how to recognise these birds when you don't always see them.

Following this the Company was divided into an older group and a younger group and each did some activities appropriate to their age.  George and Tony took the older age range to do a new worksheet which we call 'Beaks and Feet'. 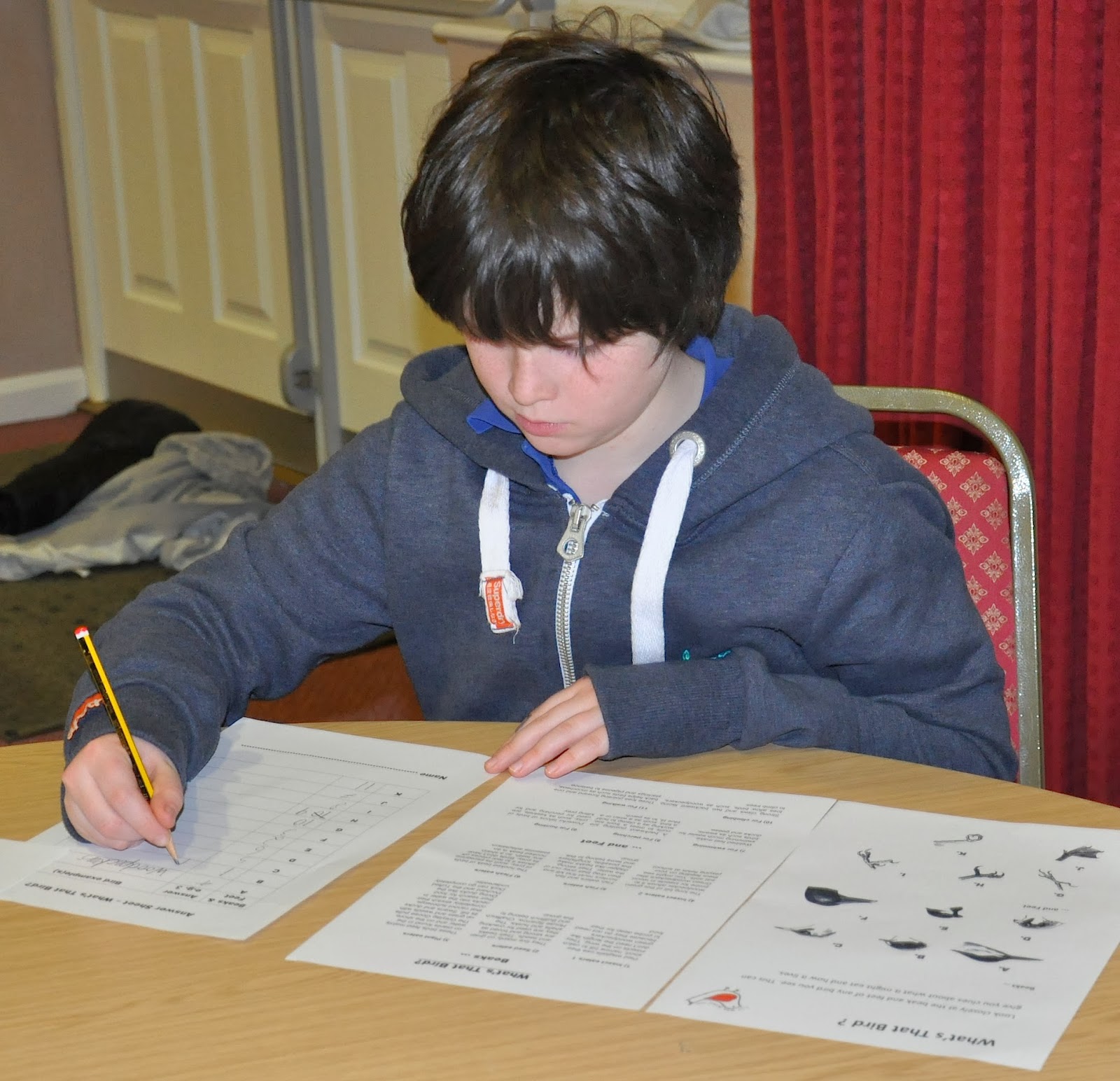 In this activity the boys had to read the text about birds beaks and feet and match this to some bird drawings in order to identify them.  We weren't sure how well this would go down with the older boys, but they seemed very interested in it and worked hard to answer all the questions. There was also quite a lot do discussion amongst the group. 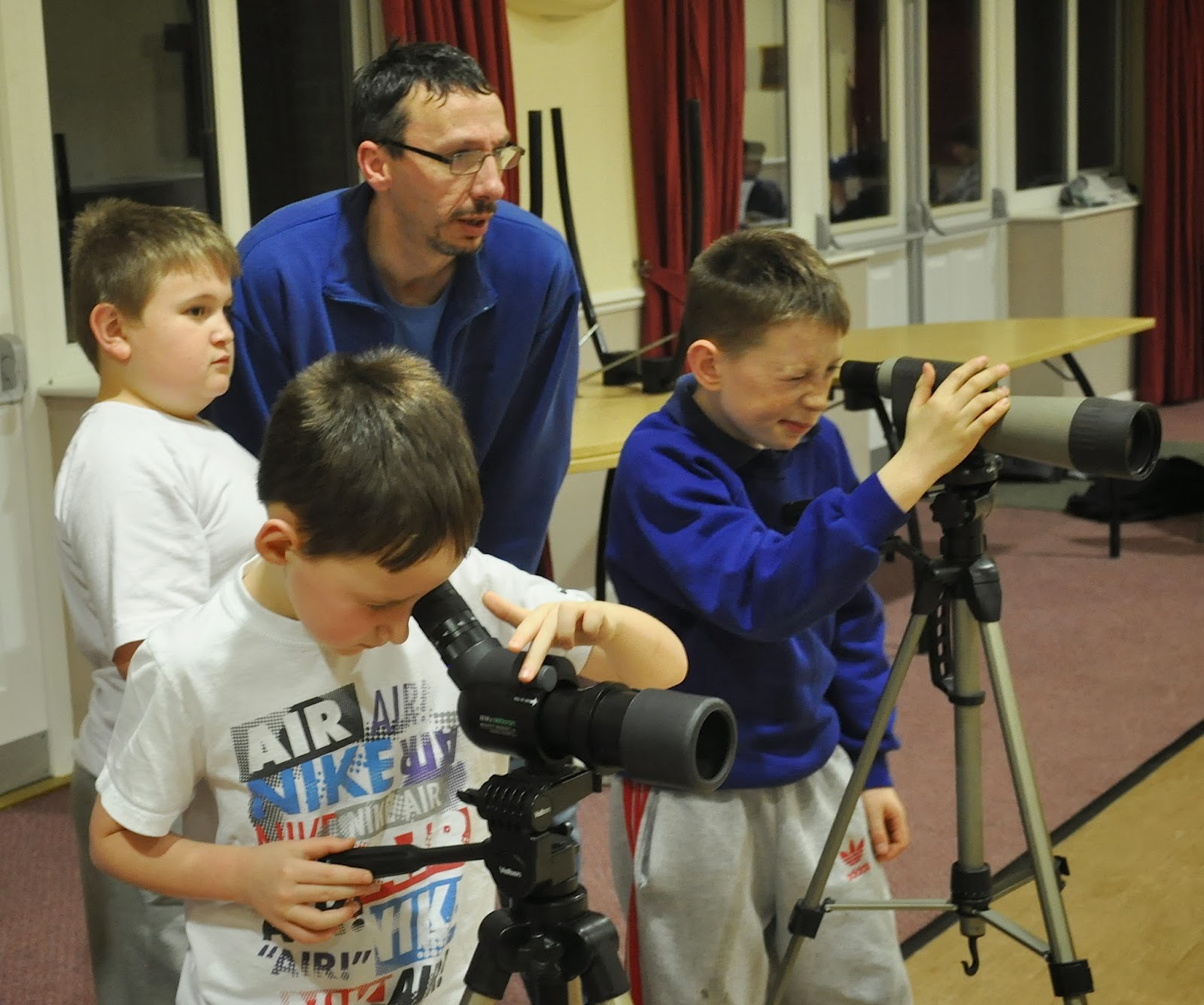 Brian and Martyn took the younger group which started off by learning how to use binoculars and spotting scopes.  Some bird drawings were placed on the wall on one side of the room and the boys had to look at them through the binoculars and identify them if possible.

It was very rewarding to find that the youngsters could remember the names of most of the birds we had described previously and with practice could identify them through the binoculars or scopes.  Even the volunteer staff got involved in using the equipment and helping the boys to use it, which was great. 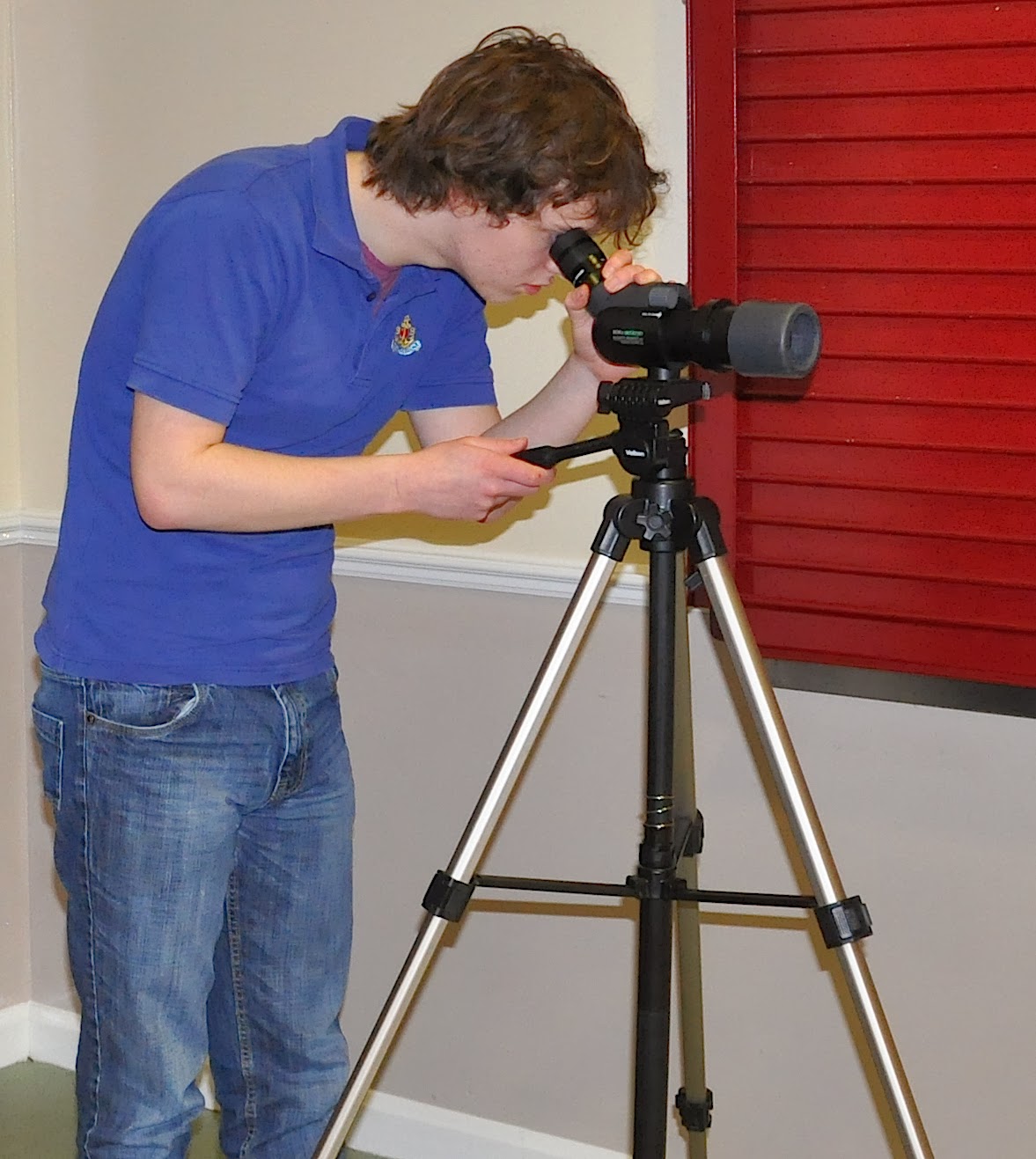 After about half an hour we swapped activities, giving the binoculars and scopes to the older group whilst the youngsters did a bird ID quiz where the photographs of nine common birds had to be matched to their descriptions and so identify them by name. Whilst they were doing this the older group was doing our new 'Bird Optician' activity with the binoculars!

This is where a drawing of a bird is shown with some text, but each line of text gets smaller as on on an optician's eye chart.  The bottom line is the smallest size and this gives the name of the bird in the drawing.  This new activity seemed to go down very well and so will feature in all our presentations from now on.

After the youngsters had marked the answers to their bird identification quizzes (and some got all nine correct), Martyn showed them some examples of real birds' wings which had been kindly lent by another member of the L.O.S.  Everyone, including the adults were fascinated by these, especially how soft the feathers and how light the wings were.  Brian explained that this is because the bones are almost hollow having a honeycomb structure just like a Crunchie chocolate bar to reduce their weight -  it's funny but Crunchies don't seem to reduce my weight! 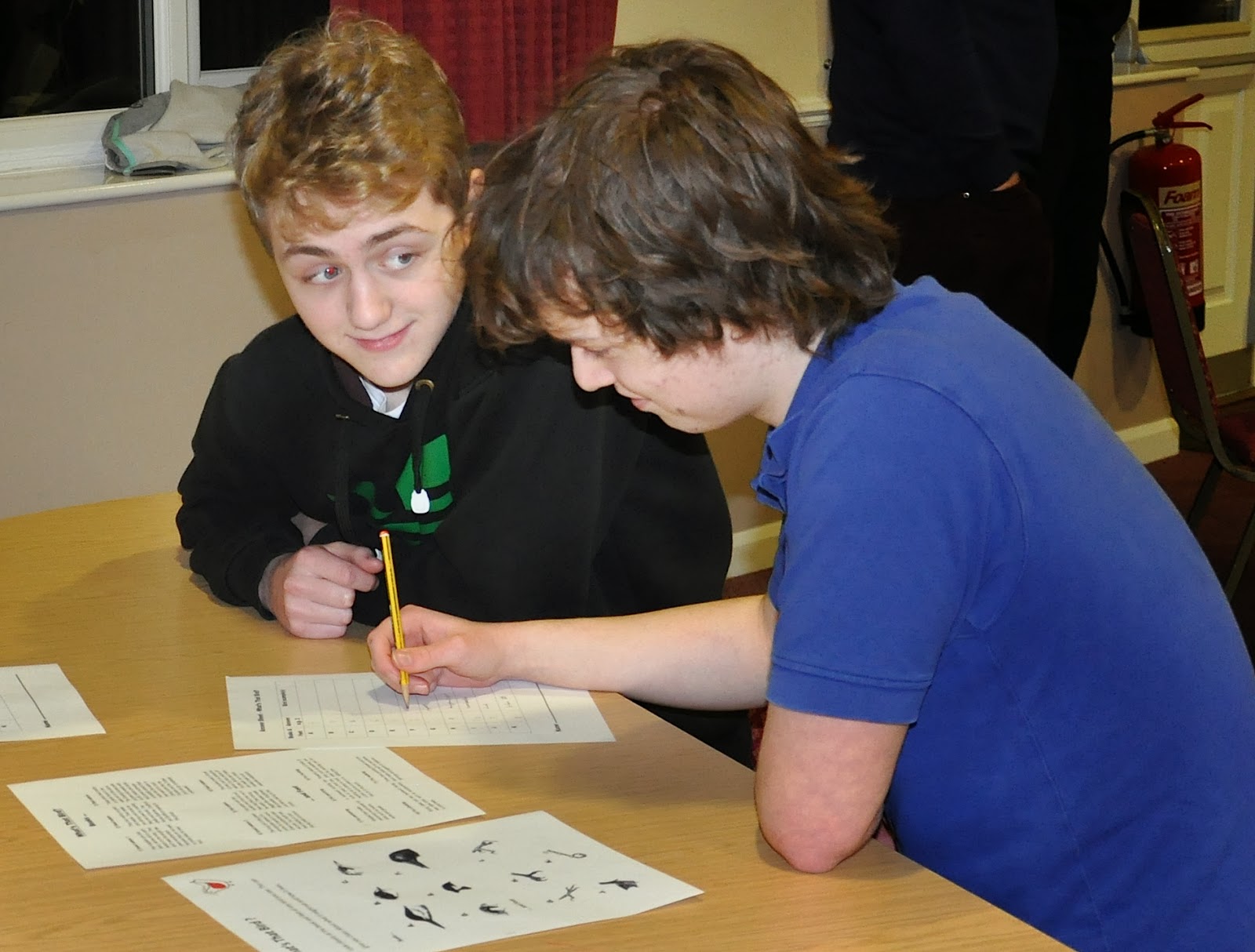 Finally the Company all sat down in front of the screen again and Martyn finished off the presentation by showing them the LOSYBC website and mentioning that it might be possible to take them on a guided walk around Pennington Flash sometime later in the year.

A video of two Great Crested Grebes doing their mating dance was shown to finish off and Martyn explained that this behaviour can often be seen at the Flash in spring.

At the end of the evening we were thanked by the Boys' Brigade leaders and voluntary staff and we left feeling that it had gone down very well and that we would be happy to return at sometime in the future. 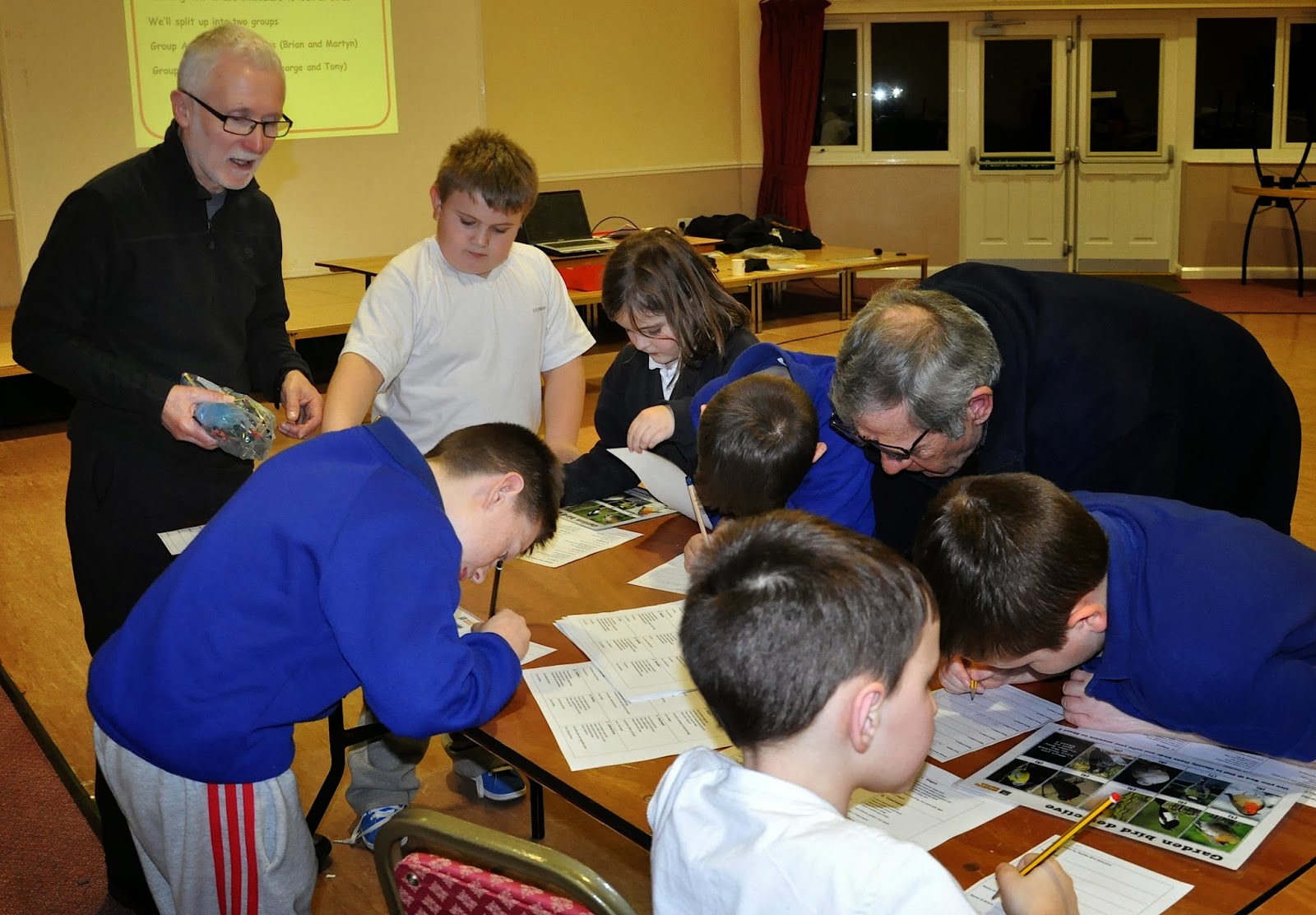 P.S. It would be great if you left your name in the comment text so we know who you are.